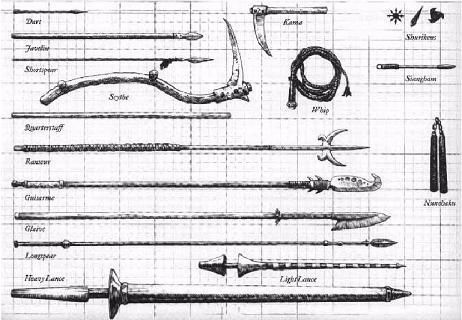 Apart from the quarterstaff, all of these weapons are classified as exotic weapons, despite having sub-par characteristics making them similar in performance to simple weapons. The term exotic in this case seems to have been used literally, as none of the weapons are particularly difficult to use compared to their Western analogs. Apart from their use by monks, there is little to distinguish the weapons. The list was seemingly influenced by martial arts in popular culture, yet does not reflect the armament of any iconic "monk" in history or myth. The list further seems to reflect the misconception that Eastern martial arts focus on odd weaponry, rather than a variety of weaponry including weapons both familiar and unfamiliar to Westerns. Traditional Chinese martial arts use the staff, spear, jian (straight longsword or rapier), dao (scimitar or curved sword), butterfly sword (short, chopping sword) and three-section-staff, in addition to a number of peculiar, less-common weapons. Okinawan martial arts include the staff, sai, nunchaku, kama, various chain weapons, spear, and shield. Shuriken were a nuisance, last-resort, or tactical weapon of Japanese warfare, while traditional Japanese fighting arts focus on the tachi (large curved sword), katana (partially curved longsword-saber hybrid), wakizashi (curved shortsword), tanto (dagger), naginata (glaive), bo (staff), jo (baton), jitte (forked baton), yari (spear), and kyu (bow). The lack of a spear among the special monk weapons does not reflect the traditions of China or Japan, the principal inspirations of the mythological fighting monk. The abbreviation of any type of sword from the list seems intended to promote the monk's exoticism, even though historically and in Asian mythology, fighting monks were often associated with such weapons. Notably, the siangham (or siangkham) is purportedly a Malaysian weapon associated with kuntao (the Malaysian armed martial arts); if so, it seems to be a fairly obscure weapon, perhaps associated with only a subset of schools, and may not exist at all.

Later sourcebooks, such as the 3e Oriental Adventures, featured additional "monk weapons." In most cases, the additions were further oddities from obscure fighting traditions or variations on other monk weapons. Some feats or class abilities allow a non-monk weapon to be used as a "special monk weapon."

Retrieved from "https://rpgmuseum.fandom.com/wiki/Special_monk_weapon?oldid=6501"
Community content is available under CC-BY-SA unless otherwise noted.